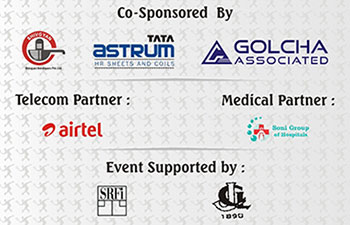 The Jaipur Junior Open is being organized by the Surbhi Misra Sports Foundation at one of the most iconic Jaipur Club.

The Jaipur Junior Open is being organized by the Surbhi Misra Sports Foundation at one of the most iconic Jaipur Club.

Jaipur Club Ltd. has been a great promoter and supporter of the sport in this country for many years. The club has successfully organized the Harish Chandra Golcha Memorial Squash Championship from the year 2000-2008. It was the most awaited squash tournament at the circuit for the junior and senior players. The Club then revived this tournament from the year 2012 along with Surbhi Misra Sports Foundation to bring back the most awaited tournament at the circuit.

The Energy Minister of the Government of Rajasthan, Mr. Gajendra Singh Khimsar, who was himself a former Squash player, will be the honorable Chief Guest of this event.

JAIPUR JUNIOR OPEN 2014 is being presented by TATA STEELIUM. Tata group has been a great promoter of sports and their association in the tournament has come as a great boost for the sport in the state.

The Golcha group was founded in middle of the 19th century. With some of the richest deposits of Talc in the world, the Golcha Associated Group are the foremost producer of Talc Powder in India. Not only do they supply to leading Paint, Paper, Plastic, Cosmetics and Soap manufacturers in India, their products are also sought after all over the world.

Mr. Vikram Golcha, Chairman, Golcha Associated Group of Companies is himself a squash player and has been a great support in promoting and supporting the growth of Squash in the State.

I congratulate Surbhi Misra Sports Foundation and Jaipur Club for hosting an event of such magnitude in Jaipur. I wish all the players great luck in the tournament. Hope you have a great time in Jaipur and you enjoy your stay here.

Two decades of illustrious contribution to the Real Estate Industry in Jaipur has made Shivgyan Developers Private Limited a trusted entity and has carved a niche for itself as the most reliable developers of residential and commercial projects in and around the city.

Shivgyan Group is more than just a brick and mortar company, as we strive to constantly imagine, conceptualize, create and deliver world class, innovative landmarks. We cater exclusively to connoisseurs of luxury.

Fuelled by the youthful energy and futuristic vision by its directors Vinod Sawalka, Suresh Sawalka and Umang Sawalka, the group is destined to write a new chapter in Real Estate History.

Soni Group of Hospitals gives structure to a 25-year old tradition of caring and innovation built on strong foundation of quality and commitment by Dr. B.R. Soni. Soni Group is amongst the most reputed healthcare providers in Rajasthan. The group provides super specialty care in Cardiolgy/ Cardiac Surgery, Oncology/ Onco surgery, Orthopedics/ Joint Replacement, Neurology/ Neuro surgery, Nephrology/ Urology, general Surgery and Women's Health. It is the most sought after destination for critical care in the state with over 130 ICU beds to handle all kind of trauma and emergency cases.