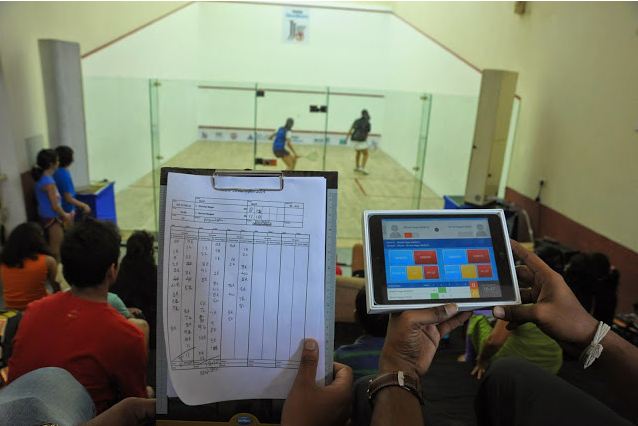 The recent activity at the Indian Squash Academy which started with the PSA and WSA events concluded with the sub-junior and junior national championship. It seemed an appropriate finale considering the nationals provided an insight into the depth of talent in the country. Nothing mirrors this better than the various age-wise competition.

The recent activity at the Indian Squash Academy which started with the PSA and WSA events concluded with the sub-junior and junior national championship. It seemed an appropriate finale considering the nationals provided an insight into the depth of talent in the country. Nothing mirrors this better than the various age-wise competition.

Indeed enthusiasm marked this year’s championship with over 500 participants in the five age categories in both boys’ and girls’ sections. A feature of this year’s edition was the introduction of ipads for referees, which  brought to the web an instant updates of the competitions.  That everything went off well  with a good attendance in particular on the final day for the various title-round matches provided a pleasing setting.

The matches too provided varying standards but overall, as the SRFI Consultant Coach Maj S. Maniam put it, “the standard of play went up a notch or two.  There is depth and that is good sign for Indian squash,” he said.  Maj Maniam should know for he has doing his bit to prop up Indian squash and the few good players who had emerged from the ISA so far have had the benefit of his training schedules.

As always the championship witnessed some good winners, a few lucky and some others who looked winners until they failed the acid test.  One of the impressive winner was Kush Kumar, easily one of the most improved players to emerge from the Academy.  He had earned fame as the first Indian junior boy to win a bronze medal  in a world championship (his deed came in the recent World Juniors in Namibia). He had also looked quite a handful in the PSA event that was held concurrently with the junior nationals.  In the nationals, he was a class apart and as Maj Maniam said, “he cruised to victory in the final against Vijay Kumar.”  This was incidentally Kumar’s last appearance in the junior event and with his latest win, he had collected nine titles over in the junior ranks, starting with U-11.

Two other players  who certainly demanded attention were Yash Fadte of Goa in the boys U-13 section  and Abhisheka Shannon in the U-11 girls’ section.  As national coach Cyrus Poncha was to say, Yash’s emergence with a clean slate is an indication of the growing talent pool in Goa. This is a good sign.  Equally noteworthy was Abhisheka, a trainee in ISA.  Daughter of two sports persons _Angela Lincy, a former national high-jumper of note and Robin, a football coach _ Abhisheka has the attributes of a good sports talent.  Fortunately her talent is squash’s gain.

Defending girls U-19 champion Harishit Kaur Jwanda was lucky to retain the title. Down two games against emerging TN player Lakshya Ragavendran, she clawed back.  Lakshya had herself to blame for suddenly when a win seemed within grasp, she fell into a phase of mistakes. Nikita Joshi, Tushar Shahani and Jeh Pandole are the other top seeds to finish of f with a win.

Summing up, Poncha said, the SRFI certainly has broken new grounds with more technology introduced in this championship in the form ipads.  Besides, he said , the continuing growth of entries for the championship can draw only one conclusion that squash in India is on the rise.