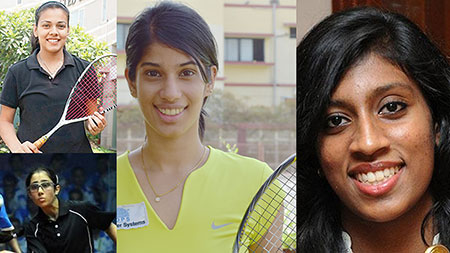 The Indian team, with national champion Joshna Chinappa to spearhead the challenge,

The Indian team, with  national champion Joshna Chinappa to spearhead the challenge, is leaving Chennai on Thursday for the  world womens squash team championship which will take place in Niagara-on-the-lake in Canada from December 1 to 6.

The other members of the side are Anaka Alankamony, Sachita Ingle (national senior runner up) and Harshit Kaur Jawanda (national junior champion).  The SRFI Consultant Coach Maj S. Maniam is accompanying the team as the official.

The team is without Dipika Pallikal, who has withdrawn and has some untested talents like Sachita  and Harshit who will be playing in a senior international event for the first time. Both of them were members of the Indian junior side for the world championship earlier.  Both are good talents and ready to  take up the opportunity that has come their way.  “It is how they face up to the challenges that will decide Indias place in this Canada Championship,” said Maj Maniam, who is optimistic though that the changes in the team should augur well for the future.

This will be the fourth time that India will be taking part in the Championship. Indias best show came at the last edition held in Nimes, France in 2012 when the country finished fifth overall.  This time India is seeded in the 13-16 bracket and placed in the Group along with Hongkong, South Africa, Austria and France. “How we cope with a team like a higher seeded teams like France, South Africa and Hong Kong will indicate Indias progress from the Group stage,” said Maj Maniam.  Over all it will be a tall order but much depends how the younger talents get inspired by the seasoned Joshna Chinappa, currently ranked 21 in the World.