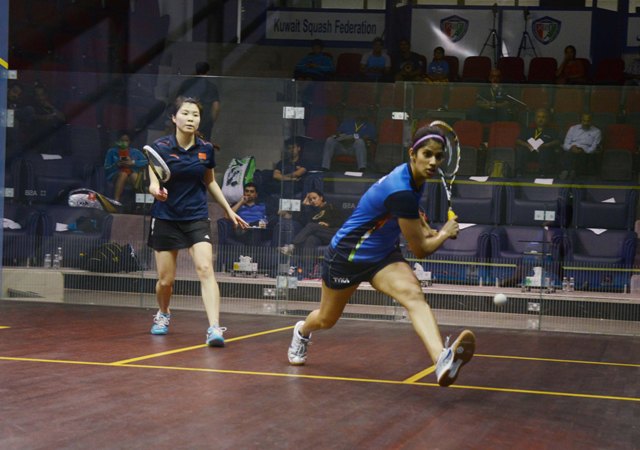 Joshna Chinappa packed a punch in her performance and helped herself to a semi-final spot on Sunday in the Asian senior individual squash championship being held in Kuwait.

Joshna Chinappa packed a punch in her performance and helped herself to a semi-final spot on Sunday in the Asian senior individual squash championship being held in Kuwait. Hers was the early high point for India on a day when second seeded Dipika Pallikal crashed out.

The fourth seeded Joshna played with a lot of confidence against  the fifth seed Joey Chan of Hong Kong but what stood out in her performance was her display of patience in her 3-2 win, according to national Coach Cyrus Poncha. In the first game for instance, Joshna saw Joey raising a 8-4 lead but  there the Indian changed gears and reeled off seven points in a row to turn the table on her opponent. The Hong Kong girl was down but not out. She showed the pluck to seize the second and third games to queer the pitch. Joshna kept her cool and that helped her take stock of the situation in a fruitful way. That she finally made it a 11-8, 10-12, 9-11, 11-9, 11-7 win was a remarkable effort, particularly the way she finished off the deciding game, with a 6-0 lead and never looking back.

Dipika who came on next seemed slow to start with and this only steeled the resolve of  the lower seeded Delia Arnold of Malaysia. Though the Indian forced the issue to five games with snatches of good show, she never seemed in it overall against the determined Delia.  Dipika lost 7-11, 14-12, 13-11, 8-11, 9-11 with the match going 95 minutes.

Late in the night (IST) the mens second seed Saurav Ghosal, the only other Indian in the fray,  is scheduled to come on against Nasir Iqbal of Pakistan in the quarterfinal.