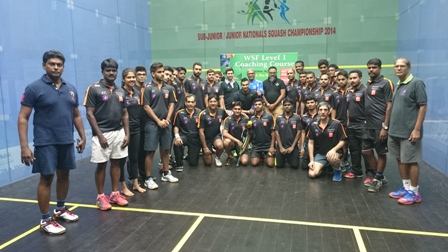 For a few days until Saturday, the focus at the Indian Squash Academy was not on the players but coaches as a World Squash Federation level-1 coaching course was gone through in the city benefitting around 80 coaches from various corners of the country. This incidentally was the first ever WSF certified course to be held in India as part of  the World Squash Federation Coach Education Programme(CEP) which aims to standardise  coaching methods world-wide. The four-day schedule went through the entire gamut from teaching and communication skills, development programmes, tournament organization to fitness and tactics. The course held under the auspices of the Squash Rackets Federation of India, was conducted by the WSF Director of development/ coaching Maj (retd) S. Maniam, who is also the Consultant Coach of the SRFI.

Maj Maniam said he was impressed with the response. “This is probably the largest group of coaches handled by me in my 30 years in this line,” he said.  What heartened him was that these coaches could  help  broad base the talent level in various places in the country. Ultimately this would reflect in the development of the sport in a big way. What was significant was not just the enthusiasm of the coaches but there were players, some former national champions too, seven of them in fact_ Manish Chotrani, Bhuvneshwari Kumari, Dalip Tripathi, Rohit Thawani, Surbhi Misra, Deepak Mishra and Anaka Alankamony _ who had won honours in various age categories, in the midst wanting to give back something to the sport that had helped them get laurels.  For a few others the course was an eye-opener as they had never been exposed to such a systematic and structured programme. The national coach Cyrus Poncha, who also participated, underlined the growing interest in serving the sport. “This augurs well for squash in India,” he said.

Prior to the main course there was a two-day programme from May 11 which had Tutors refreshers course followed by another refresher course for the various existing coaches.