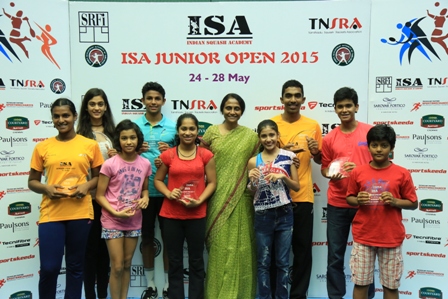 Two contests of contrasting nature formed the final phase of an absorbing finale to the ISA junior Open 2015 at the ISA courts on Thursday. As it turned out the day’s feature match involving Velavan Senthilkumar and Yohan Darius Pandole in the U-19 category provided for a thrilling finish. Just out of Don Bosco Egmore, Velavan had come into the ISA under a school coaching programme. The left hander in his first year in this higher category showed his strong basics and more importantly the temperament for the big occasion. Yohan is no push over, in fact is the top seed in this tourney and the country’s top junior. That did not overawe Velavan who began in a hurry and reeled off two games to reflect his mood. The Maharashtra lad stopped him there, even if briefly by taking control. Yohan showed his ability to vary and the stretching Velavan was forced to mistakes. The going seemed to  go Yohan’s way as he led 10-8 in the fourth game but there came the slip or rather Velavan’s pluck as he clawed back to save a ‘game ball’ and turned the contest around to his favour. In total contrast was way the way top seeded Harshit Kaur of Delhi fell to the second seed Adya Advani of Maharashtra. The reigning U-19 national champion was hardly pushed till the final and when Adya decided to do just that, the Delhi girl was often caught short of conviction. True, Harshit began brightly but the fading away was swifter.

The final decidedly brings forth happiness and disappointment. If it was joy for Samita Sivakumar in U-15 girls it was proved disappointment for Navaneeth Prabhu  in the U-13 section. He was the top seed and was the pick for consistency but the Mumbai boy Neel Joshi went a little extra to finish everything that Navaneeth threw at him.  On the other hand ISA trainee Samita had everything going her way against the top seed Deya Joukani of Maharashtra. The St Britto schoolgirl, Samita showed the grit to outplay Deya. For sheer assurance there was none to beat Akanksha Salunkhe in the girls U-17, not even Sunayna Kuruvilla who made a game bid but in vain. Principal Secretary (School Education),  Government of Tamil Nadu, Ms D. Sabitha Bengra gave away the