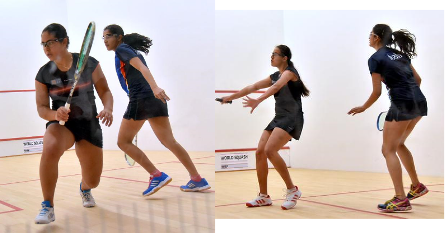 India could not come up with anything special and  went down to the top ranked and title-favourite Egypt 2-0 in the quarterfinals of the girls event of the WSF-world junior squash championship in Eindhoven on Sunday.

Considering the depth in the talent in the Indian team the look out was whether there would be a fight.  Debutant Nikita Joshi, who played first , tried her best but Salma Hany Ibrahim was far superior. The Egyptian won 11-5, 11-6, 11-2 to give Egypt the lead.  Adya Advani was pitted against the top player Habiba Mohamed and it proved a tough task for the Indian. Habiba won easily  11-3, 11-5, 11-3 to give Egypt the win and a place in the semi-final.

India now will play for the 5th to 8th place matches.

Late last night (IST),  and hours after they had beaten Australia to ensure a quarterfinal place,  India played USA and lost 3-0. The higher ranked USA team, which is also seeded two,  topped  Pool ‘Bwith India finishing runner up.   As per the draw, India is to meet top seed Egypt in the last eight.