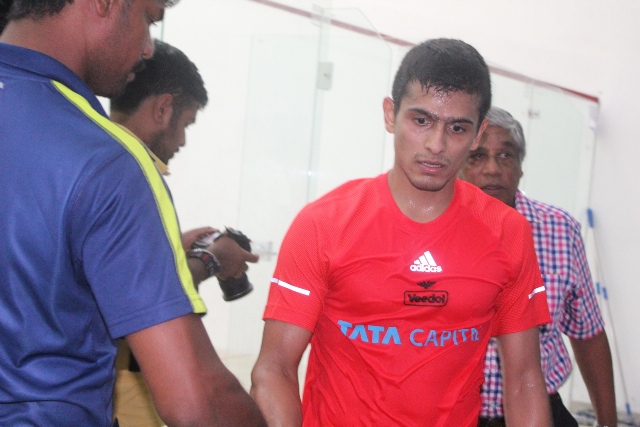 India’s top professional Saurav Ghosal recorded one of his biggest wins in his career, beating the top seed and home favourite Miguel Rodriguez of Colombia in a five-game semi-final thriller on Friday in the $50,000 Albierto Colombiano 2015,  a PSA event in the capital city of Bogota.

Ghosal who had come to Colombia nearly a week ago to adapt himself and this included sparring with the local hero Miguel, virtually left the local crowd speechless with his gritty show.  He led by two games and then saw that advantage nullified by the World number four. In the deciding fifth game, Ghosal was down 7-10 and all seemed over. The dramatic transformation came at that stage in a now typical Ghosal style as he reeled away five points in a row to conjure up a sensational win in 101 minutes. The scoreline read 11-8, 12-10, 7-11, 4-11, 12-10.

“I am delighted to have won today,” said the sixth seeded Ghosal and India’s national champion on the unbelievable success. “ I guess it required a special match and performance to beat Miguel,” he said.

On a day when things went topsy turvy for the seeded players, the other semi-final also produced an unlikely winner in qualifier Alferdo Avila of Mexico who sent out the second seed Peter Barker of England in five games.  But then Avila had beaten the fifth seed and therafter the third seed enroute and so the outcome seemed in keeping with his giant-killing form. Ranked 54 in the PSA list much below Ghosal (19), the final could have the trappings of another sensation.  Not since February 2012 has Ghosal won a PSA title.