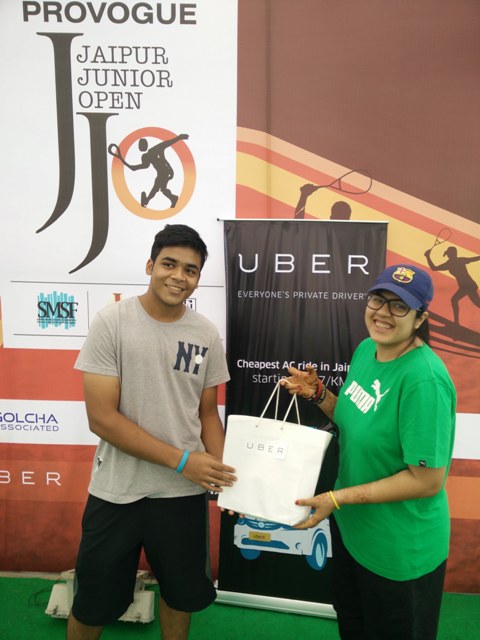 It was a day of mixed fortunes Jaipur boys on the second day of the Provogue Jaipur Junior Open as five out of eight failed to make it to the next round here on Jaipur Club courts on Thursday.
However, Jairaj Singh, Utkrash Baheti in under-15 brought little cheer to the local crowd by winning their respective matches with and Ishan Singh (under-13) moving into pre-quarterfinals. Ishan Singh will face second seed Kanhav Nananvati (TN), who defeated Ishaan Nayar (CH) 11-7, 15-13, 11-9. In the second game Nayar was leading 9-3 but Kanhav kept his cool and played a percentage game to clinch the game in a tie-breaker at 15-13.
Paarth Ambani (MH), the top seed in under-11, had no difficulty in brushing aside Devay Mehta (MH) 11-8, 11-9, 11-2. Mehta fought in the second game but Ambani was too good for him to take the game and match.
B19 - Divyanshu Sharma beat Junaid Muzaffar Thoker 3-2 (11-6, 11-8, 4-11, 5-11, 11-8)

Divyanshu started off well by surprising the crowd by taking the first 2 games of the match pretty easily. The 2nd seed Junaid made multiple unforced errors, totally 12 of them. As usual Junaid came back strongly in the 3rd and 4th games by playing basic squash and keeping the ball back with less errors. It was all set for a exciting 5th game when Divyanshu started playing  high pace game by taking lots of volleys all around the court. Junaid was spotted clueless and could not cope up with the pace hence lost the last game and match.

As the day progressed Jaipur club witnessed some close and tight finish. Harshvardhan Wadhwa just back from Asian Juniors (Iran) looked off as he could not get his lengths right resulted in easy pick up for Yohan.  Maharashtrain Yohan Surti lost the first two games of the match but he was persistent and kept pressure by making Harshvardhan move around the court. In the 3rd and 4th game Harshvardhan committed multiple unforced errors and could not keep up with Yohan's length and drop game. Yohan won the decider game and match  3-2 (8-11, 10-12, 11-9, 11-8, 11-7)

In the under-17 boys' category Sachin Chauhan (UP) overcame tough challenge posed by Jatin Agrawal (MP). Sachin began on a strong note and wrapped up first two games at 11-8 and 11-5. But in the next two games Jatin was a transformed player. Playing powerful strokes Jatin took next two games at 11-5 and 11-8. In the final game both players fought each point. However, Sachin showing better control on nerves to clinched the issue at 12-10.

Under-11 category witnessed a close fight between two Maharashtra boys - Vivaan Shah and Siddhant Rewari. Vivaan won the first game easily at 11-6. But Siddhant fought back valiantly and took next two games 11-9, 14-12 to take the control of the match, However, Vivaan had other ideas as he changed gear to win fourth and fifth games at 11-7, 11-6 to snuff out any hope of revival from Siddhant.