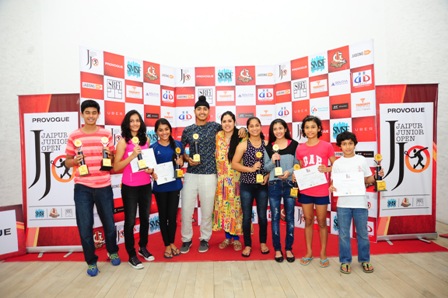 Abhay Singh (Tamil Nadu) and Akanksha Salunke (Goa) claimed the Provogue Jaipur Junior boys and girls under-19 titles by beating Robin Sigh Mann (Chandigarh) and Jui  Kalgutkar (Maharashtra) respectively on Sunday. A much fitter Abhay dominated the match right from the word go and never allowed Robin to take control of the rallies. Abhay, who played against Robin last week in the Asian Junior Championships, came with a better game and kept Robin confined to the back of the court. Being more patient of the two, Abhay committed a few errors while Robin in order to finish the rallies hit the tin with irrtating regularity. Abhay won with ease 11-6, 11-7, 11-13 to claim the crown and a purse of Rs60,000 In the girls section, Salunke defeated  Kalgutkar 1111-13, 11-3, 11-3, 11-3. Kalgutkar, who had dumped the top seed Adya Advani in the semif-finals on Saturday, began on a strong note by claiming the first game at at 11-13. Putting behind the loss of first game, Salunke, playing alomost error-less game took the total control of match, dominanting long rallies to push Kalgutkar on the backfoot. Salunke took the next three games by losing just nine points to claim the under-19 girls' title and cheque for Rs 30,000.

Chief guest Urban Development and Housing Minister Rajpal Singh Shekhawat gave away the prizes. Ajit Saxena, Secretary of the Jaipur Club, passed the vote of thanks.