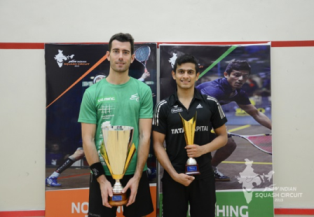 Saurav Ghosal (IND) had a tough week. His 5-game quarterfinal and semifinal matches might have been a delight to spectators, but they made for a grueling slog into today's final. On the other hand, Borja Golan (ESP) had a run of 3-0 matches until the semifinal, when his opponent conceded midway through game two after an injury. How much strategy, how much luck of the draw is difficult to say. In the end, it didn't seem to matter. One was left with the impression that Golan always knew what was going on in today's final. He came with a plan and stuck to it throughout, drawing in Ghosal with his short game before taking the point with a deadly kill to the back time and again.

The first game was fast, but unhurried, as both players showed patience in finding their openings. At 4-3, a lovely cross boast from Ghosal off the serve game him the edge, and a a lovely kill at 5-4 even had Golan applauding. But play heated up from there. Golan opened the second game with a couple of kills to get a quick lead, and the play took on a new urgency. Golan played more varied shots, and ran Ghosal around the court until midway through game three. At 5-6 down in the third, after a long rally that saw him in all four corners, Ghosal took the point. Ghosal stayed with his opponent until an unforced error by Golan leveled it 9-9, and from there, Ghosal seized his chance, taking the game 12-10. But the fourth saw Golan back in control. By 7-4 down in the fourth, when, Golan made a startling between-the-legs shot for the point, the writing was on the wall. Despite overwhelming support from the crowd, Ghosal could only scrape up one more point from a stroke. a call that left half the spectators groaning, half cheering, and Golan flabbergasted. Golan's answer was yet another dangerous kill, and the game and match ended his way 11-6, 11-4, 10-12, 11-5 in 68 minutes.

"He was very sharp today," Ghosal said. "I couldnt get him into uncomfortable positions for long enough to do what I wanted. Credit to Borja, he played well. I had two hard matches this week, but, you know, thats what you train for. I just couldnt play well enough, for long enough, to beat him. Congrats to him."

"The last final I played was in 2013. I havent won a title in two years," Golan said. "I thought the final would be very difficult. I knew Id have to play my best squash to beat Saurav. He has had a tougher week. And I think maybe that was the difference today. Mentally, he was a bit more tired from the days before and maybe I took advantage of that. I dedicate this trophy to Carlos (Cornes Ribadas) because hes always a great support and were great friends, but also to my wife, Chelo, and my future daughter, Manuela."