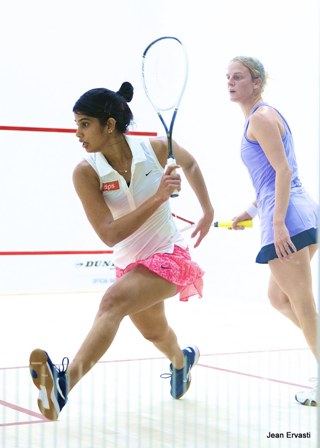 Joshna , who came through the qualifying rounds,  has thus far shown great touch to  beat  seventh seeded Emma Beddoes of England  4 -11, 16-14, 11-7, 11-4 in the first round and then in the quarterfinal she accounted for another qualifier Salma Hany of Egypt, who is above the Indian in world rankings. The scores of 11-9, 8-11,5-11, 11-8, 11-9 truly depicts a great match which it was, according to reports.  Though Joshna has a 3-0 advantage over the Egyptian in the head-to-head count,  this was a day when  Salma, who had earlier sent out the second seeded Laura Massaro of England, just would not allow the Indian to settle.  Salma had led 7-4 right in the first game before Joshna woke up  to find her lengths and repeatedly getting the Egyptian off the T to win points.

But Salma was not to be pushed down as she came strongly to win the next two games with some accurate shot-making where the Indian came up with a few unforced errors.  The  intenstity reached a crescendo in the fourth game which Salma in her enthusiasm to close up even went for a dive and hurt herself.  Joshna kept up the pressure and forced the issue to the fifth game where again points went neck and neck until at 10-9 match ball, Salma sent a forehand drive out of the court.