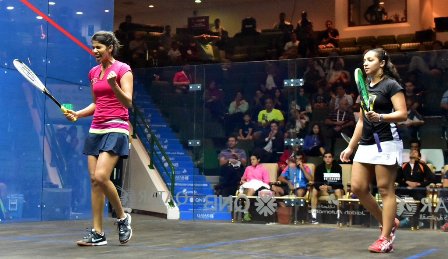 After three weeks of rigorous practice sessions at the Indian squash academy in Chennai Joshna Chinappa went to the $1,15,000 Qatar Classic in Doha and instantly caused a stunning upset , removing the world number one and top seed Raneem El Welily of Egypt in the first round.  The Indian national champion, ranked 20th in the world, won 11-9, 11-6, 4-11, 11-9.

It was sensational stuff from the Joshna, who meant business right from start. Grabbing the first two  games even before Raneem realized what had happened, the Indian seemed to do everything right.  At that juncture,  the Egyptian pulled one back and led 9-5 in the next as though to indicate that she had put things together. But  Joshna’s next burst of brilliance came and with it six straight points to leave the audience and her great rival stunned.  This is the first time that she was beating a player in the top five bracket in the world ranking. The last time she had played Raneem, the Egyptian had raced away with a 3-0 win.

Joshna will play Dipika’s conqueror Adel next.   All the top players  of the world are in Doha for this prestigious event for men and women.  India’s Saurav Ghosal  is in the fray in the men’s section and will play his first match on Sunday.