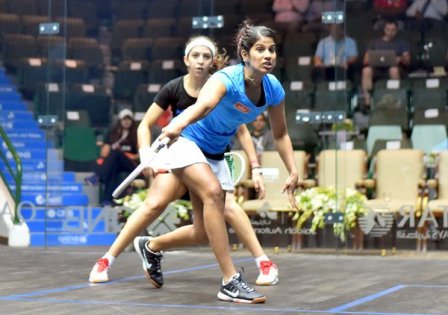 The Indian national squash champion Joshna Chinappa remained in great touch as she made the most of a fighting Yathreb Adel of Egypt in straight games 16-14, 11-8, 11-8 to make a grand entry into the quarterfinals of the $ 1,15,000 Qatar Classic in Doha on Monday.  Joshna had beaten the world number one Raneem El Welily of Egypt on day one for a sensational start to her campaign.

The scores do not quite portray the thrilling 37 minute tussle which had the makings of  a long drawn battle but  fizzled out just when it seemed climaxing. Every game was a story in itself with the Egyptian, who had knocked off Dipika Pallikal in the first round and hence was no push over,  grabbed an initial lead and then threatened to extend it before slipping. Credit for this went to the Indian who found the length of her returns touch a perfection just in time to evoke no response from the other side. “This court is very rewarding when you get your length right, it really clings to the wall..”, Joshna was to say after the match.

Joshna was down 2-6 in the first game before forcing her way up. Points went neck and neck and it was 9-9 at one stage as the contest spilled over to extra points.   It was not just close but invited the Referee to advice the players to concentrate on clearing the ball.  That aspect was ironed out but not the fight which went zig-zag.  Adel led 6-3 in the second and Joshna’s fine strokes from the back side left the Egyptian lunging and missing.  From 8-8 all, the Indian wrapped it up.  The third game too followed like the earlier ones with Adel , who is a full time student in England,  going 5-2  up and yet again saw the advantage getting destroyed by the stupendous work of her inspired opponent, who made her first entry into the quarterfinal of a world series event  in two years.  It was at Hong Kong  that she had achieved that last.

The Indian star now awaits the winner of  Sarah-Jane Perry (Eng) and  omneya Abdel Kawy (Egypt), both seeded players, for the quarterfinal  to be held on November 4.

In the men’s section however, Saurav Ghosal  late last night, went down to Egyptian Fares  Dessouki in straight games 11-7, 11-8, 11-3 in the first round.