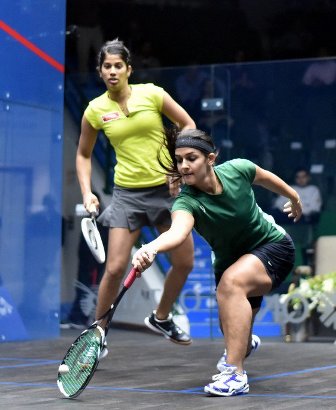 Like all good things the great run of Joshna Chinappa had to end but not before the Indian champion put up another sterling display against the fifth seeded player Omneya Abdel Kawy of Egypt in the quarterfinal of the Qatar Classic, a squash world tour series event in Doha on Wednesday.  The Egyptian won 11-8, 9-11, 7-11, 12-10, 11-6 in what proved to be a 50-minute gruelling contest.

After the first round win over world number one Raneem El Welily and her winning performance thereafter, Joshna had earned a special appeal and  this much looked forward to match  proved another cliff hanger  thanks to the Indian’s never-say-attitude.  Like her earlier matches, the Indian remained at the receiving end most times but made some sensational come backs to grab two games and drive a scare into the famed opponent.   She was down 5-9 in the first game but after a few moments of nervous tins, the Kawy took it.  Second again Joshna trailed 5-9 but with some impeccable returns  jumped to 10-7 game ball position to square the match scores.

The third game went neck and neck and at 7-all, the Indian shot ahead with four straight points and the pitch had been queered.  Not down yet, the Egyptian made a steady start to the fourth game, led 7-2 and like previous ones was on 9-5 and then went to 10-5, just a point away from taking the game only to see another dramatic fight back by Joshna.  Five winners from her racket extended the game  but little  else as Kawy ensured it was not the Indian’s day.  Kawy  not only managed to wrest the game but what is more the momentum too  as Joshna  put up only a brief resistance from there before bowing out, all tired but with her head held high.