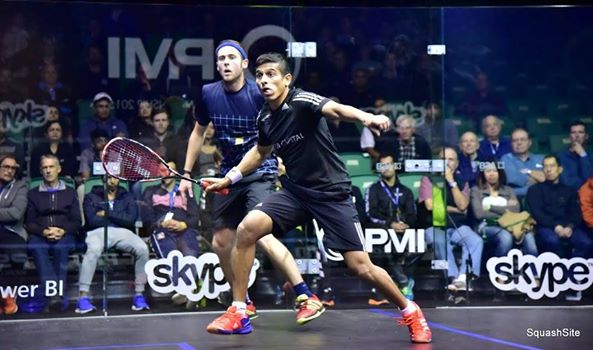 National champion Saurav Ghosal is the lone Indian remaining in the fray of the three who had proceeded to the USA to compete in the World men’s individual squash championship being held in Bellevue, Washington.

Ranked 17th in the world, Ghosal had a direct entry into this prestigious event as  the 16th seed.  The Indian met Ryan Cuskelly of Australia in the first round and beat him after an initial hiccup.  Saurav knew that taming the skilled Australian was only through keeping him running around and tiring him out.  The strategy worked but after he had conceded a game. Ghosal won 7-11, 11-8, 11-7, 11-3 and now faces James Willstrop his long time friend and sparring partner in England.

Sandhu who did well to come through two rounds of qualifying to make it the main draw as a qualifier could not stretch his stay further as he lost to  Nicholas Mueller of Switzerland in the first round 5-11, 11-1, 4-11, 9-11.  But Sandhu was a trifle unlucky with the referees calls, once failing to earn a ‘stroke ‘ and on the second occasion the rival’s three-bounce pick up was considered ‘good’.  Sandhu appealed but failed and all this had come in the fourth game when he led 9-7. Mahesh however perished in the qualifying  phase itself, losing to Andrew Wagih of Egypt 6-11, 5-11, 8-11 in the final round.