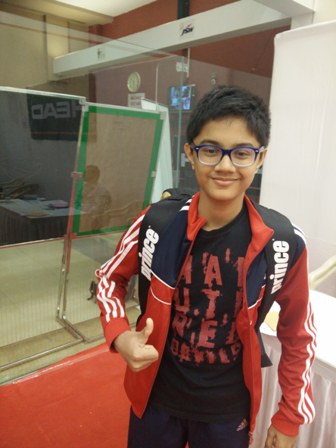 Neel Joshi was the hero for India in the British junior Open squash in Sheffield on Monday. The 12-year lad, seeded 9/16 retained his brilliant touch to stun the 5/8 seed Oliver Green of England in straight sets 11-5, 11-7, 11-6 to enter the boys U-13 semi-final.

However Adhitya Raghavan and Navmi Sharma, the two other survivors till date succumbed in the quarterfinal round.

The focus was on this tiny champion Joshi who had shocked the second seed Mohamed Mostafa of Egypt enroute to the last eight.  The Indian kept his impressive form that had brought him rich dividends in 2015 with the ISA junior Open and Indian Junior Open among his key successes. It took him just 20 minutes to complete the job and now awaits for ¾ seed Muhammad Azhar of Malaysia in the last four.

However for U-17 National Champion Adhitya and U-15 Girls National runner-up Navmi Sharma it proved difficult tasks. Adhitya, seeded 5/8, showed intial  resistance but the second seeded Marwan Tarek of Egypt had his way to script a 13-11, 11-4, 11-5  win in 35 minutes. The 5/8 seeded Navmi also fell to an Egyptian the ¾ seed Nouran Youssef. The Egyptian girl finished off in 23 minutes with scores of 11-7, 11-3, 11-3.