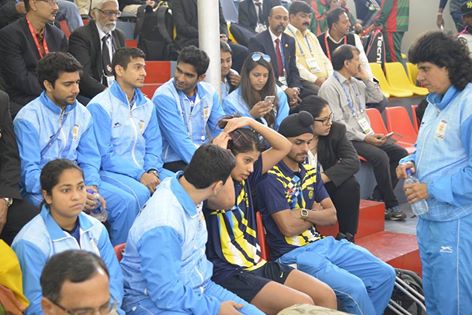 It was bad day for Indian men on Sunday as both top seed Saurav Ghosal and Harinder Pal Sandhu fell at the semi-final stage to  dash hopes of a gold or a silver medal in the squash competition of the South Asian Games 2017 in Guwahati.  The unexpected set back meant both of them as losing semi-finalists will settle for the bronze.

The only consolation was that reigning champion Joshna Chinappa kept hopes of a gold medal in the women’s section by duly reaching the final.

Much was expected of national champion Saurav Ghosal  but if ill luck had finished off Harinder when he strained his hamstring that virtually ended his  fight against second seed Nasir Iqbal from Pakistan then  Ghosal went down to the other Pakistan player Farhan Zaman.  It was Ghosal’s first major competition after the leg injury had laid him low in Hong Kong Open three months ago.  In  a way this was one big test for the Indian and it was clear from the way the Pakistan national champion dictated terms Ghosal was not fully into his known touch.  True Ghosal grabbed one game but after Farhan had already taken two.  So the fight was minimal as the Pakistan player went ahead to complete the job with scores 11-4, 11-5, 10-12, 11-5 with enough to spare.

Harinder on the other hand showed his ability to argue as he clawed back from a game down.  But the inability to keep his versatile opponent at bay meant Nasir was able to plot his way up. After comfortably gaining the third game, Nasir encountered a brief resistance in the fourth when suddenly going for a long stretch, Harinder  strained his hamstring.  From a 6-6  position the end became swift for Harinder as he was handicapped. Nasir won  11-7, 12-14,11-7, 11-6.  Harinder later had a MRI done and the news is that he will put in his effort in the team event.

Top seeded Joshna Chinappa however was in full cry in her section and playing to her potential ended the enthusiasm of the gritty Pakistani opponent Sadia Gul  in straight games 11-9, 11-7, 11-9.  Joshna will meet the second seed, also of Pakistan , Maria Toorpaki Wazir in the final.  Maria had beaten the Sri Lankan girl Mihilya Methsarani 11-8, 6-11, 11-2, 11-2.  Sadia and Mihilya will get the bronze.