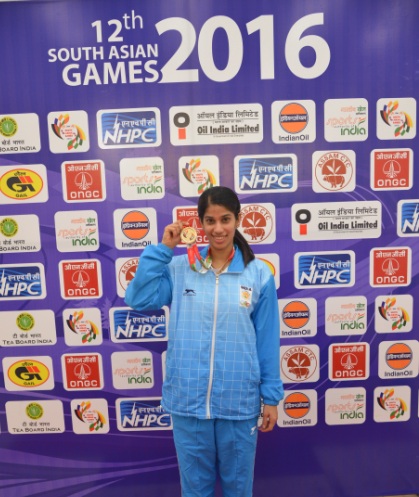 GUWHATI: Squash ace Joshna Chinappa kept her date with glory. The Indian national champion, winner of the gold in 2004 and 2006 editions made it a hat trick with another gold medal success in the South Asian Games 2016 in Guwahati on Monday.

The experienced Joshna, the top seed and  the highest ranked Indian with world ranking of 14, was the overwhelming favourite but her route to the high point was not easy, thanks to the gutsy and at times tough resistance of the Pakistan’s top player Maria Toorpakai Wazir.  Joshna won  the near one –hour match 10-12, 11-7, 11-9, 11-7.

“I am pleased with my work but it was not easy.  There were lot of pushing and shoving and interruptions too. But I did not allow that to unsettle me. I am used to fighting from two games down so losing the first game did not seem much. I was confident and I am happy to bring the country the gold,” said Joshna of her performance.

Such was  this Toronto-based Maria’s mood that she took to the aggressive mode right from start and reaped the benefit by grabbing the first game.  The points had gone neck and neck and a doubtful decision when the scores were ten-all helped Maria to forge ahead and close it off.  But then the Indian is used to facing arrears and making a come-back.   Joshna did just that but the second game was even tighter.  Maria was reluctant to release her grip and once in a sudden flurry of action she accidently had her racket hit her own face, just above her eye.  Blood spilled, requiring a ten-minute break.

The interruption notwithstanding, the closeness continued and the intensity of the fight heightened but Joshna kept her cool. She had to look out for the rival’s strong run- ins and at the same time focus on keeping the returns precise, be it the drops or the drives.  Gradually the complexion changed as Joshna rose in ascendancy and Maria realised her chances were dimming.  Having beaten her in the 2014 Asian championship, Joshna’s confidence was never in question.  Only, she needed to ensure her path to victory was cleared off all hurdles.  This the Indian succeeded in due course to make it a historic triumph for herself while clinching the first gold in squash for India.   Joshna will now feature in the team event, which also gets underway today.