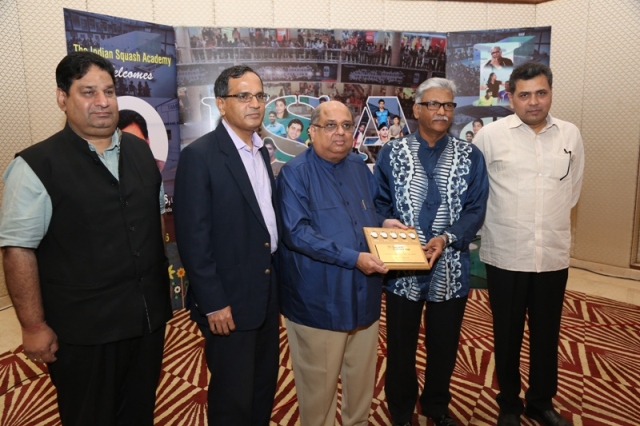 A vibrant evening showcased the Indian Squash Academy (ISA) annual day function at the Taj Connemara. Aside from the annual awards, the spotlight was on Maj. S. Maniam (retd), Consultant Coach of SRFI who is due to lay down office in June and return home to become the CEO and Director of Squash Rackets Association of Malaysia. Credited with having laid a firm foundation for a structured training system at the ISA, Maj Maniam was felicitated by Mr N. Ramachandran, President, WSF and IOA. Touching a nostalgic note, Mr Ramachandran recalled his 25-year association with Maj Maniam and highlighted the Malaysian's role in promoting Indian squash. “You have contributed a lot for Indian squash,” he said while presenting him a plaque in recognition. The day's chief guest Mr Injeti Srinivas, DG SAI, spoke of an institutition like ISA being “more than mortar and brick”. It was the collective strength, the culture and philosophy that made an institution like ISA what it is. He complimented ISA's role in pushing squash to the domain of an achieving-sport and congratulated all behind this success. Earlier the SRFI President Mr Debendranath Sarangi underscored the rise of ISA. “What started in a innocuous way has become a giant,”he said. A video presentation gave an insight of the ISA activities in a nutshell. The programme winded off with the National Coach, Mr Cyrus Poncha proposing a vote of thanks. Mr Rajeev Mehta, IOA Secretary General was an important guest on the occasion.

On to the awards and Velavan Senthilkumar (Medallist at the Commonwealth Youth Games and national U-19 champion 2015) and Harinder Pal Sandhu (Maiden title in the senior nationals and a key player in India's historic gold medal win in the Incheon Asian Games 2014) were declared the 'Player of the year' award winners for the year 2015 and 2014 respectively.

Awards in various categories for the performances in the two previous years were given out on the occasion to all those who had done well in various tournaments, including nationals and events abroad.