An exhibition of fun and skills 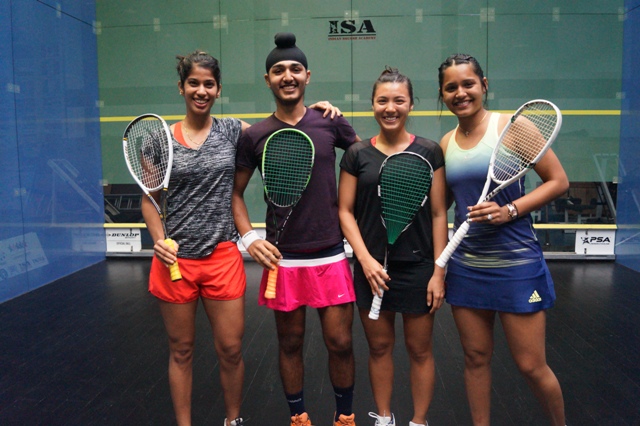 CHENNAI: Joshna Chinappa, Dipika Karthik (nee Pallikal) and Delia Aronold. All are top 20 players in World squash. To get them together and perform is rare. Rarer still was to see our own Joshna and Dipika to play alongside in India. Not in recent times have these stars played in Chennai and at the Indian Sports Academy.

So when they entered the courts the good gathering of players and parents, all of whom had been witnessing the ongoing ISA junior Open had a feast in store. It did not matter that the event was billed an exhibition match. In keeping with that the seriousness was less. Why, we had male junior player (Abhay Singh) as the fourth player dressed up in skirts to the amusement of all. Abhay was to partner Delia in playing the top Indian pair, the existing Commonwealth Games champions in what was to be a best of three -games tie.

Nobody had sought a world class show but just see the stars perform. True there was fun, the way each of them tried to nag the Referee with appeals for 'let' but there was enough in the action to know whey their backhands can be so silky and sure or why their drives to just the top of the tin can be so classy, not to speak of their anticipations. A touch of class is what transpired as for near half hour the spectators enjoyed the glass-court action every bit. For the record the Commonwealth Champions held up to their reputation. They remained unbeaten but more important was the camaraderie seen and the enjoyment in their every action.

Hardly having taken a breath or two after this, Delia again returned to play two juniors (Ashita Pranaya Bhengra and Sunayna Kuruvilla), both U-17 finalists and the Malaysian not only provided a lesson or two on control of strokes but the virtue of smooth movements on the court. Delia proved she was ready for a handful and so handling Ashita and Sunayna was no task!

For the many who were there it was an evening well spent. But it does not end there. The feast promises to be lot more richer on Saturday, the final day of the ISA Junior Open when Dipika and Delia will clash in a real test of skills. There is thus more on the morrow.