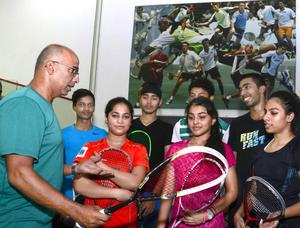 CHENNAI: Egyptian Ashraf el Karagui, the new SRFI coach, appointed by the Sports Authority of India to serve Indian squash has arrived. Ashraf was at the Indian Squash Academy on Saturday to have an interaction with the members of the Indian team (boys and girls) which will be taking part in the World junior championship to be hosted by Poland in Bielsko-Biala city from August 7 to 16. This will be the Egyptian coach's first assignment with the Indian squad.

“I had a brief look at them when I had come a month ago and then I have information on them from national coach Cyrus Poncha. So I have a fair idea of what kind of players I have in hand,”he said of his first impressions. Ashraf, who has come to India directly from Egypt, has already seen the one big difference between home conditions and here and that was the numbers. “The big advantage of juniors in Egypt is that there are very many of them ready to be noticed. Each of them get to play others and the different experiences from that can be enriching in the road to preparations,” he said. What is significant, additionally is that the top professionals find time to interact with the youngsters. “That can be a solid confidence buildng exercise,”he said while indicating why the world of squash is more often dominated by the players from Egypt.

Still, he sees lot of potential in the boys'section here and at the moment, since the world championship will also feature boys'team event, that is important. Ashraf infact believes that this group of boys in his charge had the capacity to spring a surprise or two in Poland. He would like to leave it at that for now and watch the situation unfurl in Poland. The boys' team's best show was in 2012 when a bronze medal was won.

Poncha, who regularly travelled with the team will not be doing so this time. Ashraf will have the company of two other officials, Deepak Mishra and Surbhi Mishra, both former players at the national level. The national coach said the target for the boys was a podium finish. He believed the team had the strength and depth. The boys are all in prime condition and the hope was for a good result, he added. The individual competitions which follow the team and where the girls would also come in would be lot more tougher for the Indians, considering the standards of Egyptian and English players in particular.

The Championship will witness individual events first followed by the team event for boys. The Indian team comprises of, in the boys section, Velavan Senthilkumar, Abhay Singh, Aditya Raghavan, Ranjit Singh (who will play the team and individuals), Robin Singh and Aryaman Adik (both will feature in singles). The girls squad has Akanksha Salunkhe, Sunayna Kuruvilla, Adiya Advani, Jui Kalgutkar and Ashita Bhengra.