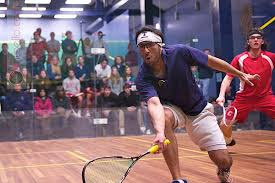 HOUSTON: US-based Indian Vikram Malhotra excelled to reach the final before losing to the former world junior champion Karim El Hammamy of Egypt in the Texas Open, PSA world tour event held here. The sixth seeded Egyptian won 11-9, 11-8, 12-10 for his first PSA title but not before surviving anxious moments against the fighting Indian

The fourth seeded Indian, who has lately been in the news with his enterprising displays in PSA events and made steady progress in the tournament, struggled a bit in the first game when he took time to settle down to a desired length in his strokes. Right on the heels of the Egyptian, Malhotra kept the scores neck and neck but Hammamy's consistency paid off. Malhotra was quick to seize a handy lead in the second game but Hammamy opened up in time to seize the advantage. In the third game, such was the closeness that the Egyptian in lunging to reach and execute a low return banged his head on the back glass wall and required a brief medical attention. But the pause did not affect his concentration as he squeezed out the win.