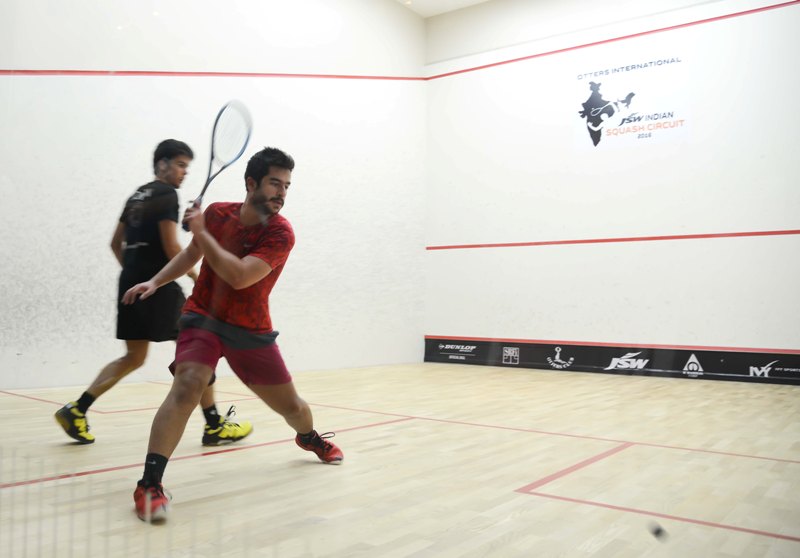 The leading Indian contender kept her date with Annie Au but not before being put through the grinder by the gritty Tesni Evans at the packed Otters Club courts this evening.

A packed gallery meant that hundreds of keen spectators including a large number of juniors had to watch the gripping action on a super large screen by the ocean in front of the impressive swimming pool at the club.

Joshana settled better winning the first readily before Tesni played herself back into the game with some much better length. At 7-7 they played a brutal rally which could well have been over forty strokes. Tesni had two game balls in the second but couldn't convert. Joshana kept finding something extra, first to level and then to take the second with a very tight length.

At 0-2 Tesni was in no mood to yield as she battled a combative Joshana and a loud and appreciative crowd that was being treated to some superb squash. She inched her way back steadily and had ' grit' written all over her manner . At 8-7 she pressed harder, and had two game balls to reduce the deficit before Joshana played a tight drop to make it 9-10. A contentious no-let for Joshana meant the Welsh woman was back in business.

They were evenly matched all through the fourth with the Indian finding a way to stay marginally ahead. The raucous crowd was going into raptures each time Joshana inched one point closer to her spot in the final. A couple of lets ensued before Tesni couldn't reach one at match ball and the decibel levels went through the roof.

A fine win for Joshana who will play Annie for the title.

Delia raced out of the blocks to open a 7-1 lead before Annie found her rhythm to level at 9. Delia managed to string together a couple of crucial points to get ahead.

There was very little to choose between them as the precision of Annie's drops were neutralising the fine all court play of Delia. Annie took the second.

Delia responded admirably to lead 9-6 and then 10-9 but Annie kept fighting and a superb volley ended the third.

In the fourth it was all Annie as a seemingly dejected Delia helped her to close it out.

A solid performance by the top seed in an extremely entertaining encounter.

The artistry of Al Muzayen was a treat to behold. Lopez hung in there as there was clearly a niggle that Muzayen was feeling midway through the second. The speculation of a bad ankle or a strained hamstring was being discussed in the crowd as Lopez led 10-7 in the third. A visibly uncomfortable Al Muzayen was using his deft touch to deny Lopez as he pulled level. A fourth game ball for Lopez was saved. The legs weren't coping as Lopez converted the fifth one to turn into the outstretched hands of Al Muzayen who was in no position to continue.