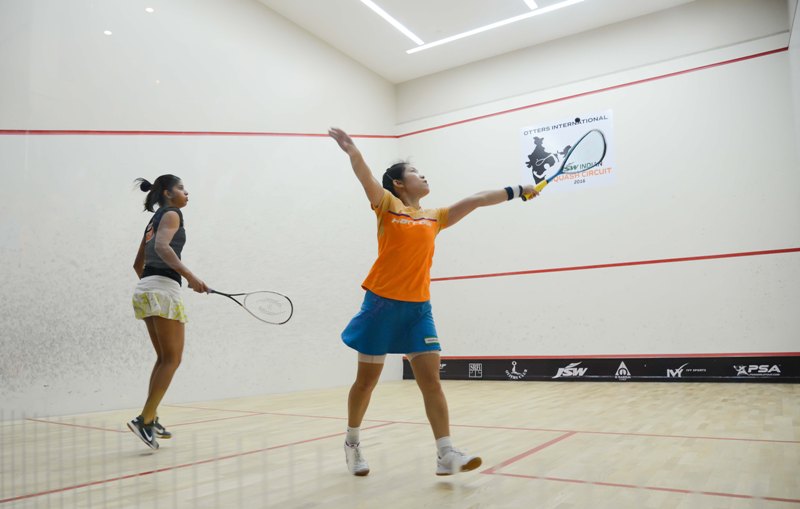 The curtain came down on the opening events of the JSW Indian Squash Circuit 2016 at the Otters courts this evening.

The two Spaniard's who are good friends off the court contested the Men's Final. Bernabeu had a lot in the tank as he strolled to a straight games win over Lopez who had his moments briefly towards the end of the second. Bernabeu was far too accurate and composed and completed a well deserved victory.

A packed crowd welcomed the top two ranked women in the draw. They traded the honours in the first game with Joshana winning several points in the backhand corner whilst Annie controlled the pace mixing the height with some precise drops.

The crowd egged the home player on as another extremely even game was played out . At 10-9 to Joshana the noisy crowd was going ballistic. Annie stayed calm to save that and then created a game ball of her own and managed to take a crucial 2-0 lead with a wall hugging shot that drew no response.

It was going to be a mountain to climb. To make matters worse Joshana had an injury below her knee to start the third as the referee ordered an injury timeout. The despondent faces of the kids who packed the front of the gallery like sardines told the story.

The Indian champion battled on gamely, pushing hard but Annie's well placed shots were finding their mark with consistency. There was a late surge from Joshana but it was not quite enough as Annie played yet another one to the forecourt to make it a memorable trip to Mumbai.

The action then got hotter. The Chairman of the JSW GROUP , Sajjan Jindal , himself an avid squash player, accompanied by another squash player in the family, his son, Parth, took the court before being joined by the Guest of Honour , Ranveer Singh, the Indian superstar from Bollywood and dignitaries from Otters Club including their President , Mustafa Arsiwala. The crowd went berserk as he entered to some loud music from his latest film. There was lots of jostling for space and the energy was palpable.

Ritwik Bhattacharya thanked the JSW GROUP and K Raheja Corp and the various sponsors for their support, the Otters club for its warm hospitality.

Ranveer then sportingly played a game with Akanksha Salunkhe from Goa thrilling the crowd with his antics. He had clearly done something fantastic for women and for Indian squash as the curtain came down on a well received event.