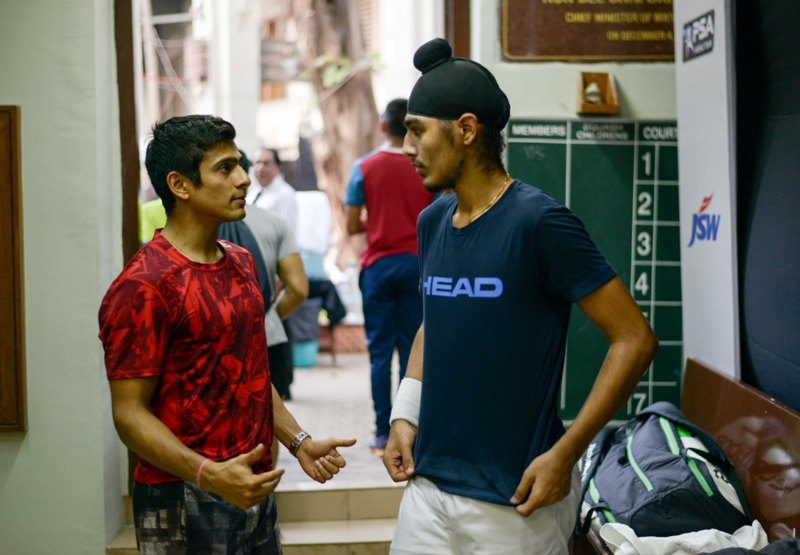 Tight scores and tight shots all the way through made for an intense first game between the Welshman and the Indian. Abhay Singh kept Peter Creed more than just alert, making him work hard and actively strategise, but in the end it was Creed’s ability to better set up rallies that allowed him to take the first game pull through the first game, 11-8. The second game took Creed by surprise, and the home crowd by quite a happy one, as Singh’s (shots) took him to a 5-0 lead. But a few dying shots from Creed along with a few strokes in his favour, quickly saw him equal with Singh, and go on to tip the game in his favour. And by “tip the game in his favour,” I mean that after losing the first five points, Creed won the next eleven points in a row. Boom. In the third game, Singh did well to keep Creed guessing and working. The second half of the game saw Singh give himself a two point buffer twice, at 6-8 and then at 8-6. Singh’s confidence grew and he began playing tighter, and this coupled with Creed falling out with the referee (only slightly, just a drop-the- racquet-in- disbelief situation) saw the latter unable to close the match in three straight games. But, the pattern Singh had managed to drive out of Creed’s game returned in the fourth, as Creed expertly used even the slightest of Singh’s loose balls to win the fourth and final game, 11-6.

What Sandhu comes off as off court, he most definitely is on court: solid. This was made very clear right from the start. While it did seem like Cornes was slightly heavy after his odyssey with India’s Aditya Jagtap in yesterday’s first round qualifying match, he still did his best to break Sandhu’s well-versed swing and configuration. But Cornes could not find a depth and width good enough to get a scoring above five, and lost the first two games 11-4. With the tournament’s top seed, Borja Golan, at his side during the crucial 90 second intervals, Cornes came into the third game stronger, sending Sandhu flying into the corners and taking a 3-0 lead. The game remained tight, with Sandhu making more errors than the first two games. Cornes fought past a twisted ankle to win the game 12-10. But the triumph was short-lived, as it was Sandhu’s turn to force mistakes from Cornes. Sandhu bagged the fourth and final game 11-7. His victory makes him the third Indian in the main draw, after Saurav Ghosal and Ramit Tandon.