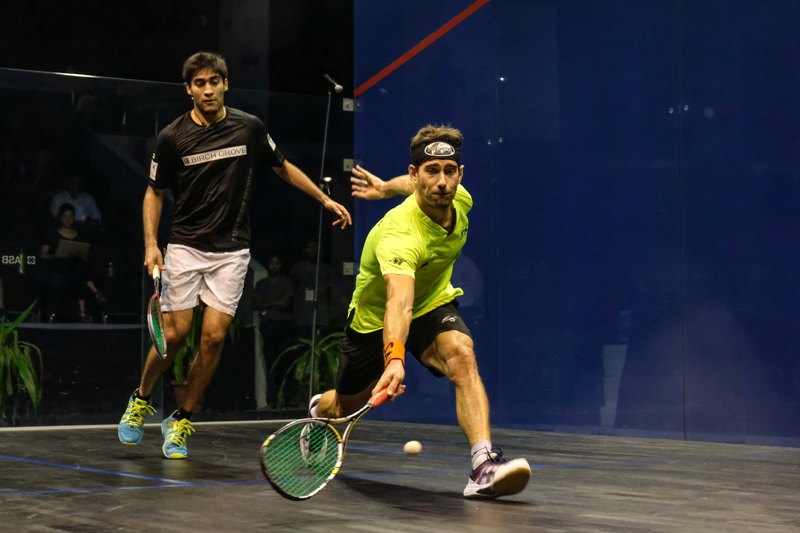 The Wild Card entry from India played the tournament’s first seed in a match that began with the latter taking a quick 4-1 lead in the first game. However, Tandon gave the seasoned Spanish player quite the reply by leveling the score 4-4, by which time the game had already seen a couple of stand-offs between the referees and both players. Golan’s experience and steadiness gave him the lead in the second half of the game. However, with the crowd on Tandon’s side, the underdog clung to Golan, and in an unexpected twist, using good length, won the first game. With grown confidence and tight shots, Tandon made the second game tough for Golan, starting strong and only allowing Golan to lead by single points in the second half of the game. A stroke and an error from Tandon put Golan at game ball, before he won the second game 11-7. Golan returned the gesture, taking the next game 11-7, almost making it seem like Tandon’s first game win was a simply a late start from the Spaniard. However, Tandon was far from over, and snatched the fourth game from Golan, 11-6. Golan seemed unable to shake off some referee-related drama, which furthered Tandon’s game, working in his favour. The Golan-referee banter went on throughout the match, and by the fifth game Golan seemed a lot more frazzled than his initially more composed demeanor. To the crowd’s delight, Tandon won the game 11-8, beating the World #18, in a tantalizing five-game encounter.

After the more dramatic encounter between Borja Golan and Ramit Tandon, the match between India’s Saurav Ghosal and Welshman Joel Makin seemed more tame; with both players clean and tight squash. The first game saw Ghosal outclass the 23-year-old Makin using good control and his balanced swing. Makin kept the second game close, but not close enough as once again, Ghosal emerged with a 2-0 lead. The third game saw Makin play much tighter, and with more daring shots, made Ghosal work much harder. He took a 6-4 lead, but Ghosal caught up to level the score. But more tight squash from Makin and errors from Ghosal resulted in Makin bagging the third game, 11-6. Ghosal was quick to establish the first game in his favour, leading 5-1. He kept the momentum to win the game and the match itself. He becomes the second Indian to make it to the semi-finals of the tournament.

Providing the crowd with a very pleasant surprise, India’s #3 ranked player, also the World #69, Harinder Pal Sandhu won the first game 11-6. Though Mosaad seemed to come back strong and kept his hold upon the second, Sandhu made a comeback to win the second game as well, 12-10. But being a much more experienced player, Mosaad was able to snatch the third game with a decisive 11-2 win. The fourth game saw Mosaad leading, but Sandhu refused to back down, and not only kept Mosaad on his toes, but also showcased lightening fast speed and diligence bring his score up to 8. But Mosaad pulled through to level the match at 2-2. The fifth game saw a Mosaad sweep, with him leading 10-1 match ball, and winning the match 3-2 after quite the comeback.

The last quarter final of the day saw Switzerland’s Nicolas Müller dominate throughout the first game. Müller used good length and near-perfect drop shots in order to get his early lead, but in the second game, Gamal charged out to lead, making it seem like the match would level to one game apiece. But Müller was quick to respond, leveling the score from 4-7 to 7-7, and quickly taking the game. The third game saw Gamal suffer an ankle injury, but he got back on court after a brief medical timeout. However, the game, and match in extension, was then quick to slip out from under him as Müller continued with his well-established pattern, giving him the only 3-0 victory of the day. He faces India’s Ramit Tandon in tomorrow’s semi-final.