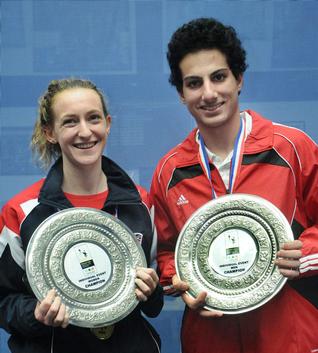 Mazen Sabri (Egypt) and Camilla Tomlinson (Gbr) covered themselves with glory after emerging victorious in the men’s and women’s sections respectively in the World University Squash Championship at the Indian Squash Academy here on Thursday.

Mazen Sabri (Egypt) and Camilla Tomlinson (Gbr) covered themselves with glory after emerging victorious in the men’s and women’s sections respectively in the World University Squash Championship at the Indian Squash Academy here on Thursday.

In terms of a contest the finals fizzled out but there was no doubting the high standards that came on view. Cool and collected Camilla appeared to see through the game of the top seed Olga Ertlova of Czech republic. Normally a swift mover with a good touch with the racket Olga never looked the fighting player she was, Camilla ensured that with her testing returns and perfect placements. Trailing in each game, Olga gave in to the resilient British girl in under 40 minutes. “I must say this is one of my biggest wins . This is a world level title. I am truly happy,” said Camilla of her achievement while Olga admitted “she played better.”

Two Egyptians later gave a glimpse of the high-quality squash they are used to at the international level. It did not matter that Mazen and Zahed came from the same background. Both are friends but on court no quarter was given none asked. Both played with immense concentration. Where Mazen was different was his ability to get the ball to strike where he wanted, just above the tin and with consistency. Be it in the drops or the forehand blasts, Mazen virtually had his opponent skidding and gliding to great lengths. “I am familiar with Zahed’s game and that helped,” said Mazen in the end as he rose to take the gold medal in just 35 minutes of play.

A brief medals ceremony followed the two finals with FISU officials, Allison Oddel, Zena Woolridge and Dr Csaba Hedi in attendance to give away the medals. The team events gets underway on Friday.