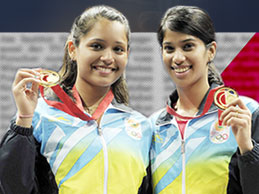 Joshana Chinappa and Dipika Pallikal made history at the Scotstoun Sports campus in Glasgow by winning the women’s doubles final to clinch the gold medal, India’s first in squash in the Commonwealth Games.

Joshana Chinappa and Dipika Pallikal made history at the Scotstoun Sports campus in Glasgow by winning the women’s doubles final to clinch the gold medal, India’s first in squash in the Commonwealth Games.

The fifth seed duo beat the redoubtable top seed pair of Jenny Duncalf and Laura Massaro of England in straight games 11-6, 11-8. Both the England players have had the distinction of being ranked number two in the individual rankings and that made this show of the Indian pair, both Chennai-based girls, an outstanding effort.

Both Joshna and Dipika showed great coordination, wasting no opportunity in killing the rallies for points. In fact after the fluent first game, the Indian pair had trailed 2-7 in the next but from there they bounced back to reel point after point to upset the rival’s plans. The whole tussle was over inside 45 minutes with Dipika finishing off with a clever drop shot.

“It is a fabulous achievement, as this is India’s first ever squash medal since the sport was introduced in the Games in 1998. said national coach Cyrus Poncha.

Earlier the Indians had stormed into the final with a dramatic win over second-seed Australian pair of Kasey Brown and Rachael Grinham in the semi-finals. The Indians won 11-9, 7-11, 11-4 in a 50 minute thriller.

"It's historic and we won't be satisfied until we get the gold medal," Dipika had said after the semi-finals. The 22-year-old was particularly keen as she could not participate in the Delhi Games in 2010 after being ill on the eve of the competition.

That the two had become a solid pair was witnessed in the tri-nation tournament held in Malaysia in June as a run up to the Games. Dipika and Joshana had then rallied to beat New Zealand’s Joelle King and Amanda Landers Murphy for the title.

Maj S. Maniam, the Coach of the team was delighted that the Indians had played to a plan with perfection. "At this level what counts is how well the players combine. Joshana and Dipika showed good aggression and were sharp. That made the difference. This is a success that I will cherish for long"